Sleight of Hand with a Twist: 15 Great Crafts Made With Playing Cards

In the world of crafting, our absolute favourite things are always the ones that we can make using something we already had around the house or would normally use in another way. There’s just something about repurposing and upcycling things that really appeals to use more than most other kinds of projects! Recently, we cleaned out some storage drawers in our basement and found a shockingly high number of old packs of playing cards, most of which were missing one or two cards and could no longer be used properly. That’s how we found ourselves searching for awesomely crafty ways to reuse old playing cards in DIY!

Just in case you love the idea of making crafts with playing cards just as much as we do, if not more, here are 15 of the very best ideas that we’ve come across so far in our search.

Are you the kind of crafter who loves to make Christmas tree ornaments any time of year so that you have plenty of different ways to display your creative work when the season finally rolls around? We do that too, which makes the bookmarking tool our best friend! This fantastic playing card ornament definitely made our list. Get the full details for how it’s made on Adventures in Making!

Of course, any time we see playing cards and thinking of them in reference to just about anything besides playing actual card games, the film Alice in Wonderland comes to mind! We’ve loved that quirky story since we were kids, so we’re sure it’ll come as no surprise to anyone that we have absolutely made old playing cards into movie styled soldiers before. See how it’s done on Red Ted Art.

What if all this talk about DIY projects and playing cards has actually gotten you interested in the idea of making playing cards of your own as well, rather than just making things out of the olds ones you’ve found? In that case, we think you might find this neat tutorial from Instructables that shows you how to make unique looking clear plastic playing cards quite intriguing indeed!

Like us, are you the kind of crafter who really loves the fact that you can make pretty faux flowers out of just about anything at all? In that case, we’d definitely suggest taking a look at how Dollar Store Crafts did just that using a pack of old cards! They show you how to cut and layer the pieces just right and even affix the middle with a pretty red jewel.

Did we actually catch your attention when we stared talking about making things with playing cards that would suit a particular holiday, even though it’s not the right time of year right now? Then here’s another seasonal tutorial for you to bookmark for later, only this time it’s a Valentine’s Day idea! Check out how Thrifty Jinxy used playing cards to make adorable Valentines for their loved ones.

Just in case we’ve really caught your attention with the concept of making Valentine’s Day themed things from your old playing cards but you’re interested in finding DIY decor concepts as well, here’s another idea that we think might be worth your attention! Check out how My Teen Guide made this lovely heart themed playing card garland in just a few simple steps.

Now that we’ve got you thinking about the concept of making cool wall decor from your upcycling-worthy playing cards, are you feeling quite intent on finding other kinds of pieces besides just garlands? Then we think you simply must take a look at the way Brooklyn Limestone made this lovely playing card wreath that has a stylishly scattered look about it.

If you’re going to work with something that technically falls into the realm of card and paper crafts, would you rather flex your origami muscles a little bit and practice your folding techniques? In that case, we have a feeling you might get along very well indeed with the concept of making this rather impressive 12-card star craft outlined step by step in detail on Making Math Visible.

Perhaps we’ve really caught your attention with the idea of doing a little bit of folding and paper crafting but you’re convinced you’d much prefer to make something that has its own practicality or use to it? In that case, we’d definitely suggest taking a look at how Ekla used some careful folding techniques to create an awesome playing card gift box!

Just in case you’ve been thinking a lot about the playing card flower concept we showed you a little earlier on our list but you’re certain you’ve got what it takes to make something a little more difficult, since you’ve got lots of card and paper crafting experience, here’s a fantastically detailed tutorial for you to try your hand at, courtesy of SS Art!

Are you actually such a huge fan of awesome playing card crafts and concepts that you can’t help appreciating their actual aesthetic as well, almost wishing you could wear a piece of it at all times so other people can appreciate it too? Then we’re very pleased indeed to report that, thanks to this tutorial from Almost Alice, you actually can! They walk you through the process of making a lovely little bow necklace from a three-ay folded playing card fastened with ribbon in the middle.

Perhaps you’re the kind of fantastic party host who really likes making cute little custom things for just about every dinner or gathering you have at your home? Then here’s an awesome idea for your next one if play card aesthetics are something you love! We really appreciate the way The Perfect DIY made these wine glass tags from bottle caps, beads, and cut pieces of old playing cards, letting people identify their glass by the suit so they don’t get their drinks mixed up with their friends’.

Did we actually really catch your attention with both the concept of making Alice in Wonderland themed crafts with your playing cards and the idea of creating something you can wear from them, but you’re just not sure which route you’d like to take yet? Then we have a feeling you’ll get quite a lot of crafty satisfaction out of seeing the way Now Thats Peachy did both by using their playing cards to make this lovely movie themed hair piece.

Just in case you’re still open to the idea of bookmarking seasonal crafts for later, here’s a funny playing card idea that will help you make something sweet and delicious using the cards as a base! Just in case you love the idea of making little food based Christmas houses but you’ve never liked gingerbread, here’s a tutorial from Faithfully Free that replaces the cookies with playing cards so you can concentrate on getting creative with just the candies.

Have you actually found yourself scrolling through our list and thinking about how much fun it might be to make playing cards of your very own ever since we showed you the idea of making clear plastic playing cards, even though you’re not sure that’s quite the style you’d like to create? Then here’s another tutorial from The Perfect DIY that you should definitely take a look at! We love the way they used jumbo popsicle sticks to make skinny versions of cards that are easier for little hands to hold. 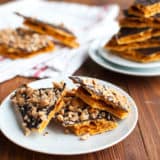 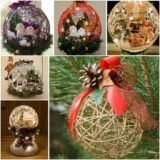 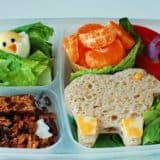 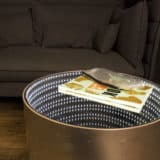 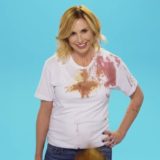