Few things make us feel quite as cheerful as making, decorating, and eating cupcakes. That’s especially true around the holidays! Don’t get us wrong; we make cupcakes all year around (probably more often than we should, if we’re being honest), but Christmas time gives us an awesome excuse to get particularly creative with the flavours, ingredients, and designs.

Just in case you love the idea of making creatively delicious and festive looking Christmas cupcakes just as much as we do, if not more, here are 15 of the very best recipes we’ve seen so far this season!

What could sound better than a cupcake that comes with another bonus treat on top? Nothing we can think of! That’s why we’ve actually already made these fantastic gingerbread cupcakes with cream cheese frosting outlined step by step on Cooking Classy once this season. The spice of the gingerbread and the creaminess of the frosting contrast perfectly… plus cake!

If you’re going to create a flavour contrast, would you rather include a salty element with your sweet, rather than a spiced one? In that case, we’d suggest taking a look at how The Cake Blog created these mouthwatering chocolate covered pretzel cupcakes instead! Bonus points for the fact that pretzels sold around this time of year are shaped like Christmas trees so they look holiday themed too.

White chocolate lovers rejoice, there’s a decadent option on our list for you as well! We’re completely in love with the way Hungry Happenings made these adorable polar bear themed cupcakes using vanilla cake, vanilla buttercream frosting, and white chocolate cups in different sizes to make the bear itself on top.

Are you absolutely enticed by the idea of making a cupcake that has chocolate and salted pretzels but you haven’t found the tree shaped ones in stores so you’re looking for a different cupcake topper concept to make sure things still look Christmassy? In that case, we think you’ll get along a little better with something like these pretzel and Nilla cookie reindeer instead! See how they’re made in more detail on Your Cup of Cake.

Rather than just piling flavour combination elements onto the tops of your cupcakes, would you rather actually make a cupcake and frosting recipe that has unique holiday flavour built right in? In that case, we’d definitely suggest taking a look at how Life, Love, and Sugar made these flavoruful cupcakes that don’t just taste like eggnog but more specifically (and more deliciously) eggnog lattes!

Are you still thinking about how much you love the idea of making cupcakes that taste like white chocolate but you think you’d actually prefer to combine the flavour with another taste, just for a bite of more intense tasting holiday contrast? In that case, we have a feeling you might get along a little better with something like these refreshing white chocolate peppermint cupcakes featured on The Cake Blog!

Now, these hot cocoa cupcakes featured on Baker by Nature aren’t just any old hot cocoa inspired, chocolate flavoured cupcakes. These are taken to the next level! Check out their tutorial to learn how they made absolutely perfect chocolate sponge and topped it with smooth chocolate icing, a layer of holiday sprinkled and dried chocolate syrup, and even a toasted marshmallow on top!

Maybe you’re feeling pretty intrigued by the idea of making cupcakes that taste like holiday peppermint but white chocolate really isn’t your favourite flavour? In that case, we think you’ll be pleased to learn about this alternative mint recipe from Your Cup of Cake that combines Oreo cookies and crushed peppermint instead!

Are you actually a little bit practiced in cupcake decorating and you’re feeling quite confident in your icing skills? Then perhaps you’d rather use those to create a design yourself instead of just placing things on top to make a theme! We love this very simple cupcake decorating idea from Lydia Bakes that’s great for beginners and teaches you how to make an adorable iced Christmas tree complete with sprinkle ornaments.

If icing the decor right to your cupcake and just embellishing the design from there sounds like the best idea for you, here are some adorable frosted snowmen outlined step by step on Beyond Frosting! Make their arms from pretzel sticks and their hats from halved Oreos and a bit of red icing too.

Even though we love getting very fancy indeed with our cupcake designs, sometimes the best ones we make are the ones that keep things a little simpler. These fantastic Christmas lights cupcakes featured on Baked Bree are the perfect example of what we mean! Ice then in vanilla frosting, pipe a thing spiral around in black, and use M&Ms as coloured Christmas lights!

Have you been scrolling through our list and realizing that you’re torn between the latte recipe and the peppermint flavours we’ve shown you? Well, who says you have to choose between the two? Instead, try your hand at making these delicious peppermint mocha cupcakes featured on Baker by Nature! We love that the crumbled candy cane gives them a bit of a crunch.

Maybe you’re looking for a flavour of cupcake that might appeal a little more to adults than kids since that’s who you’ll mostly be hosting over this holiday season, even though you still want delicious Christmassy flavours? In that case, we’d definitely suggest taking a look at how The Sprinkle Factory made these fragrant chocolate cherry amaretto cupcakes in surprisingly few simple steps!

Have you actually been thinking about how cute the idea of Santa hat cupcakes might be ever since you saw the miniature frosted Santa hats on the snowman cupcakes we showed you earlier? Then we think you’ll be pleased to hear that Frugal Mom Eh! is here to make your day! We love the way they used marshmallows to add all the hat’s pom pom and trim.

Just in case you’re new to the world of icing and piping but still determined to learn, here’s a design that will get you doing some simple techniques in that regard but also still embellishing with other delicious tidbits! Your Cup of Cake guides you step by step through the process of making a Christmas wreath cupcake using a piping star tip, pieces of fruit leather, and some M&Ms. 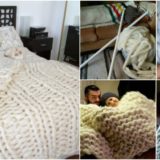