In our house, it’s pretty much unanimous that the stuffing is everyone’s absolute favourite part of the Thanksgiving dinner. That’s why we always make at least two kinds! That might sound like a lot of work to some people but for us total kitchen enthusiasts and stuffing fantastics, it’s totally worth it. Every year, we make the traditional kind of stuffing that our family loves so much but we also make one other more unique kind, just to keep things exciting and interesting.

Are you feeling just as interested as we were, if not more, in the idea of making a new, unique kind of stuffing that you’ve never tried before? Check out these 15 fantastic ideas, flavour combinations, and recipes that we’ve come across so far in this year’s search!

Now, this wasn’t actually the kind of stuffing that was classic for our family, but we know many people who make their stuffing every year with apples and sage and we really wanted to try it out! We used this recipe from Chowhound to do so and it was beyond delicious, so we were very pleased indeed that we decided to try out someone else’s classic, just to see.

If your family loves meat based dishes just as much as ours does then we’d be willing to bet that you’ll get along very well indeed with this next idea! Food Network is here to show you how they made this fragrant and flavourful sausage and herb stuffing that’s got a little something extra to leave you just a bit more satisfied than usual.

Do you live in a house full of seafood lovers but it hadn’t really occurred to you that stuffing might be an opportunity for that? Then we think you’ll be pretty pleased with Serious Eats for letting you know that it actually can be! Their recipe and tutorial show you how to make a unique tasting white bread oyster stuffing with fennel, tarragon, and sausage. We tried this one in real life as well and we simply couldn’t get enough of it.

Are you actually a first time Thanksgiving dinner maker and you’re preparing it for your whole family this year, so you’re really looking to get it right? In that case, we think you’ll really appreciate how simply and neatly Averie Cooks lays out their version! They show you how to make it with French bread, sage, and onion, which is pretty close to how we’re used to making it as well.

Are you the kind of cook who usually likes to keep things pretty standard, at least around the holidays when there are so many classics that people are expecting, but you’re still not completely opposed to changing at least a couple ingredients for unique flavour here and there? In that case, we have a feeling you might get along a little better with something like this flavourful sourdough stuffing outlined in detail on Living Lou.

Are you feeling a little bit adventurous in the stuffing department but you’re still looking to keep at least the spices the same, since those are truly your favourite part? Well, if you’re still willing to swap at least the bread up then we think you might appreciate the way Serious Eats suggests making this super satisfying buttermilk biscuit stuffing instead!

If you’re willing to swap up several things about your stuffing recipe but you’re also still feeling quite intent on making it something that’s fragrant and has great texture? In that case, we’d definitely suggest taking a look at how Food 52 made this delicious challah, mushroom, and celery stuffing.

If you’re looking to make yourself something that your friends most likely haven’t tried before but that’s packed full of unique flavour, then we have a feeling this next recipe from Bourbon and Honey might just be the one for you! Take a better look at their tutorial to see how this pretzel bread stuffing with bacon, leeks, and mushrooms was made in surprisingly few simple steps.

Maybe rather than adding meat to your recipe like some people do, you’d prefer to make a version of stuffing that’s a lot more rich in delicious vegetables? In that case, we think you just might be the perfect person to give this mouthwatering stuffing from Food 52 that has squash, brussel sprouts, and apples mixed in with the bread a try.

Have you actually been scrolling through our list hoping to come across a recipe that everyone around the dinner table can enjoy, even if they have certain dietary restrictions when it comes to meat and other animal products? In that case, we’d absolutely suggest taking a look at how Serious Eats made this scrumptious vegan stuffing that’s just as satisfying as any kind you’ve had before!

Are you a total mushroom lover but you’re just not sure that the previous idea we showed you that involved mushrooms was quite ideal enough to convince you to try it? In that case, we think you simply must take a look at how Food 52 made this ciabatta stuffing with chorizo, sweet potato, and mushrooms instead! It’s a truly unique flavour combination that we’d actually never tried in a stuffing before and we’re very pleased indeed that we did.

Have you actually been scrolling through our list looking for a stuffing recipe that involves a little less bread than usual? Yes, you read that right; some people really do find stuffing a little too bread heavy for their tastes! Luckily for all of us, there are delicious recipes out there like this one from Simply Recipes that shows you how to make a mouthwatering wild rice stuffing in place of one that’s all bread throughout.

Perhaps your favourite idea on our list so far has actually been the idea of making a stuffing that involves bacon but you’re just not entirely sure that the one you saw previously had quite the kind of flavour you’re going for? Then we’d definitely suggest taking a look at this tutorial from A Beautiful Mess instead! They teach you how shockingly simply this irresistible bacon and bourbon stuffing can be made.

Are you actually still feeling yourself in the market for a sausage based stuffing over anything else but, once again, you’d like to see as many options as you can before you make a final choice? In that case, we’d absolutely encourage you to take a look at the way Food Network made this delicious and quite easy sausage cornbread stuffing that’s quicker to do compared to some recipes.

Are you actually still feeling quite decided on just making the regular kind of traditional stuffing you always make, but you can’t help wondering whether or not there might be a more interesting way to present or serve that stuffing to your guests? Well, we’re pleased to tell you that your patience has finally paid off! Check out the tutorial featured on Serious Eats to learn how they made these fragrant stuffing waffles that you can smother in gravy rather than syrup.

Do you have another favourite Thanksgiving stuffing recipe that’s always a huge hit in your house but that you don’t see here on our list? Tell us all about it or link us to the recipe in the comments section so we can try it out too! 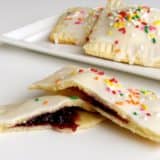